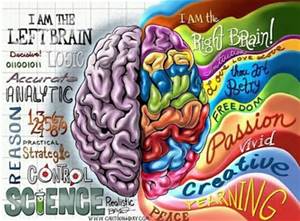 In talking about balance and Yin and Yang, I can’t help but think about right and left brains.  I took one of those stupid Facebook quizzes recently and it told me that I’m 76% Left brained (focusing on Symbolism) and 24% Right brained.  I am a very linear thinker.  Things are orderly.  Numbers don’t lie.  I am not flowery, I am squarely in “the box” so when someone says to think outside the box, I’m at a loss.  Make up something on the spot without parameters, I don’t think so.  So 876% left sounds about right (or correct as the case may be.)

“So, if you’re so left brained and non-creative how can you be a poet and so successful at Charlapalooza?” you might ask.

If you don’t remember or weren’t subscribed at the time of Charlapalooza, the quick and dirty description is me against another poet writing quick poems about suggested topics.
In response, I would say, “Because you all told me what to write about!”

There was a large and glaring difference between the poems that Danielle Rose (my last competitor) wrote and those that I wrote.  Mine were shorter, condensed and more literal translations of the suggestions.  Danielle’s were more creative, more outside the box.  Here’s an example.

Kim Hartnett’s suggestion was “Seashell Secrets” and she said it needed to be an alliteration
My poem read:
Seashells have sensual secrets
Tickling temptations and tonal tendencies
Undertones of the undersea
Vestiges of the voluptuousness
Wanton and willful
X-rated and exhilarating
Yummy
Zing
Danielle’s poem read:
The cool touch of it against my ear
Screamed with the sound of the
Waves crashing high over my head.
Instantly brought back to the summer,
Those moments with my feet in sand
Like snow, sun like charcoal on my hair.
What I wouldn’t give to be there again,
Listening to the water racing on the shore
And racing back again. The unending cycle.
What I wouldn’t give to be back there,
Lost in the sound of that seashell.
Softly slipping water, sliding over
Shells and sounds of the seashore.
What I wouldn’t give to see him once more
On the softly sliding slopes of the dunes.
The secret slippery slope of a seashell.
See what I mean?  Here’s another.
Secret desire – By Danielle Rose
~suggested by Dahlia Ramone
There’s a door in the forest
Covered by trees.
If you look carefully you’ll find
A mound of sweet purple blooms
That have no business in that shaded
Grove, basking in rays of sunlight
Covering an oak slab door.
What I wouldn’t give to give up
The meatloaf for dinner, the emails
For work, the laundry needing folding.
I’d run to that grove, sneaking into that
Streamer of sunlight, breathing in the
Blossoms, escaping forever into the
Unknown of that oaken secret door.
And mine:
1:23 AM
The dogs are barking again
Nudge Jon without hope
Swing legs over the side
Toss on a robe and slippers
As the dogs dance in excitement
Glad I’ve acknowledged their need
To bark at stuff probably
Trudge downstairs
Dogs leading the way
Open the sliding glass door
Rush to talk to their imaginary mid-night friends
Open the pantry and look for chips
Try and get them down quietly
As if
Nothing’s quiet in the sleepy silence
Sit on the couch
And gently crunch a handful
Let the dogs in and
Grab just one more – handful that is
Share the last couple chips
Begrudgingly with the dogs

Creep back to bed
See what I mean?  We think differently.  And that’s what makes the world awesome.  Our differences.  If we didn’t have differences, the world would be monochromatic, monotonous and boring.
Do you think you’re right or left brained?  If you’d like to check out the other poems that were written for Charlapalooza (and there were other great poems including one about a mouse living in a tennis ball!) click the links above to check them out.