Mind KEY / Health  / The chemistry behind cannabis: An overview 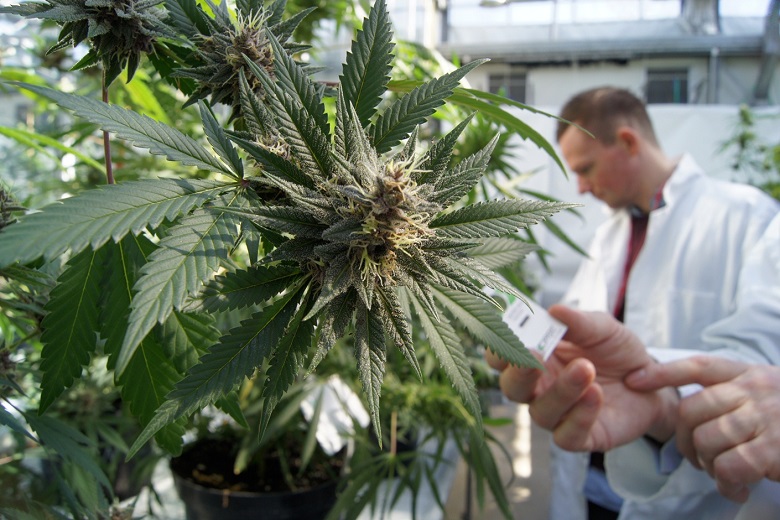 Understanding and researching cannabis’ chemical breakdown and structure is important to comprehending the overall cannabis debate.

What exactly is cannabis? What is its chemical makeup? What’s the difference between the terms, marijuana, hemp, THC and CBD? Are they all names for the same thing? How does this psychoactive drug offer medical relief? What parts of the plant are used, and what properties do they have? What are the plant’s chemical constituents and how do they work within the body?

To answer all of these questions would take a series of books, never mind a series of articles. However, Mind Key correspondent, Joey Morelli, attempts to give an overview of this complex, and often misunderstood plant, and how it works.

The historical use of cannabis

Cannabis is a genus of flowering herbaceous annual plants—fibrous species that complete their life cycle in a single growing season. Cannabis consists of three recognized species: Cannabis sativa, Cannabis indica, and Cannabis ruderalis. The name “Cannabis” is often used synonymously with marijuana, commonly referred to on the street as weed. However, Cannabis offers much more utility than a psychoactive drug.

As many of our articles this month have noted, the first recorded history of cannabis use is uncertain and ancient. According to a variety of sources, the first use of cannabis seems to date back almost 30,000 years ago. Specifically, a 1995 article published in the Fresenius’ Journal of Analytical Chemistry traces THC, the core chemical that gives cannabis is psychoactive properties, to an ancient Egyptian mummy during an autopsy by German archaeologists Franz Parsche and Andreas Nerlich.

All parts of the plant…

For centuries, farmers have harvested and used the entire cannabis plant. The inner fiber of the stalk can be processed into a fiber known as hemp. As per Cannabis, the September 24, 2015 issue of Nature: The International Journal of Science, hemp can be woven to make canvas for clothes and ship sails, ropes and other similar products. Likewise, the hard core of the stalk, known as the hurd, provides pulp to make paper and oils for paints, the same as tree pulp. The seeds of the plant are also rich with carbohydrates and proteins, making them a healthy addition to granolas and cereal.

Cannabis has a fairly short growing period, but produces a high yield, making it extremely favorable to farmers as a low input, high output crop.

In the PBS special “Botany of Desire,” cannabis is described as having evolved to be reliant on humans. In other words, it is so beneficial for humans to cultivate due to its euphoric effects and material uses, that its survival is almost guaranteed by our desire to use it. Hundreds of strains now exist and are viewable on Phylos Biosciences’ Galaxy website.

PBS ends the segment by stating, ”The human desire for intoxication may have transformed a pygmy weed into one of the most valuable crops in the world. But in a kind of co-evolutionary quid pro quo that is as fascinating as it is surprising, the plant has, in turn, enabled us to unlock some of the deepest secrets of our own brains.”

How THC and other cannabinoids affect the brain

The chemical components of cannabis, neurotransmitters known as cannabinoids, are derived from the flowers of the plant, which come in male and female variants. According to The Cannabis Crop, published in Nature, the plant contains around 545 known compounds, 104 of which are known as cannabinoids. Tetrahydrocannabinol (THC) is the key factor in the psychoactive side effects of the flowers.

According to the article “How Marijuana Works” published by authors Bonsor and Gerbis on the site “How Stuff Works,” as the plant matures, chemicals known as cannabidiolic acid slowly develop into cannabidiol. Cannabidiol matures into THC at flowering, at which point it can be harvested. The potency of THC is determined by growing conditions, climate, genetics of the plant, and the processes by which the flowers are harvested.

THC and other active chemicals enter a user’s bloodstream through smoking via the alveoli air sacs in their lungs, or through ingestion. Eventually, the cannabinoids are accepted by cannabinoids receptors in the brain. According to the National Institute on Drug Abuse (NIDA) research report on how marijuana produces its effects, the body’s naturally produced neurotransmitter, anandamide, has a similar chemical structure to that of THC. Therefore, when THC is introduced into the body, it is also accepted by anandamide receptor neurons, encouraging them to fire at a much higher rate. 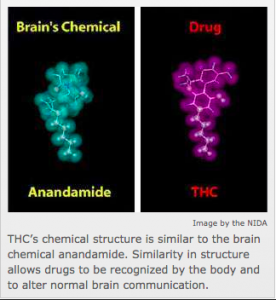 The chemical structure of THC and the neurotransmitter, anandamide. Image courtesy of drugabuse.gov.

The chemistry of side effects

Another NIDA report on the effects of marijuana found that THC and other cannabinoids from cannabis use include hampering short-term memory, coordination, learning and problem-solving. The highest concentration of cannabinoid receptors are on the hippocampus, which controls memory; the cerebellum, which controls coordination, among other things; and the basal ganglia, which controls unconscious motor functions, such as instinctive coordination like balance. THC itself is mostly responsible for the positive side effects that lure people to use marijuana—eye dilation, which leads colors to seem more vivid, euphoria and relaxation.

NIDA warns that THC also causes many of the more negative side effects associated with marijuana use—increased anxiety, paranoia, distrust, fear, panic, and issues with complicated thinking and learning after continual use. Studies have been completed regarding the addictiveness of cannabis, including by the National Cancer Institute (NCI), but results have been inconclusive. Addiction may be caused by purely psychological symptoms, as there is not yet much hard evidence of biological-caused addiction. It becomes habit-forming rather than physically addictive.

As marijuana used to be one of the main targets for the American war on drugs, its medical uses and even the uses of cannabis as a building material have been stigmatized. However, the National Cancer Institute advocates for its use a major tool in helping patients through chemotherapy. For cancer and AIDS patients who must go through chemotherapy, medical marijuana is used as a supplement to relieve pain, reduce or eliminate nausea, and stimulate appetite, since chemotherapy tends to make a patient not want to eat.

According to the book Junior Drug Awareness appetite stimulation, commonly known as the “munchies,” are caused by endocannabinoids that stimulate neuroreceptors responsible for hunger, creating appetite even if you’ve already eaten. A 2015 review published in the Journal of the American Medical Association studied varying reports confirming how appetite was stimulated with cannabis use and could facilitate weight gain in patients with HIV or AIDS.

NCI also lists other medical uses, including but not limited to, relieving pressure in the eyes of someone suffering from glaucoma, preventing convulsions through muscle relaxation in epileptics and relieving muscles spasms in those with multiple sclerosis. NCI also mentions a key factor as to why the use of marijuana medically does not pose the same dangers as other drugs do: it is impossible to lethally overdose on cannabinoids because cannabinoid receptors are not located near the area of the brain controlling respiration, unlike, for example, opioid receptors.

For now, medical marijuana use is highly restricted, but with NCI and other government institutions researching its benefits, and the increasing support for marijuana becoming legal for recreational use, it is unlikely that cancer patients and others with chronic illnesses will be denied this option for reprieve in the near future. 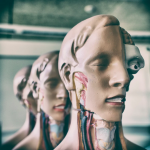 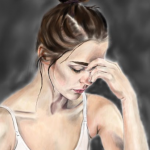