Not Waiting for Life: Embracing your detour

Mind KEY / Health  / Not Waiting for Life: Embracing your detour 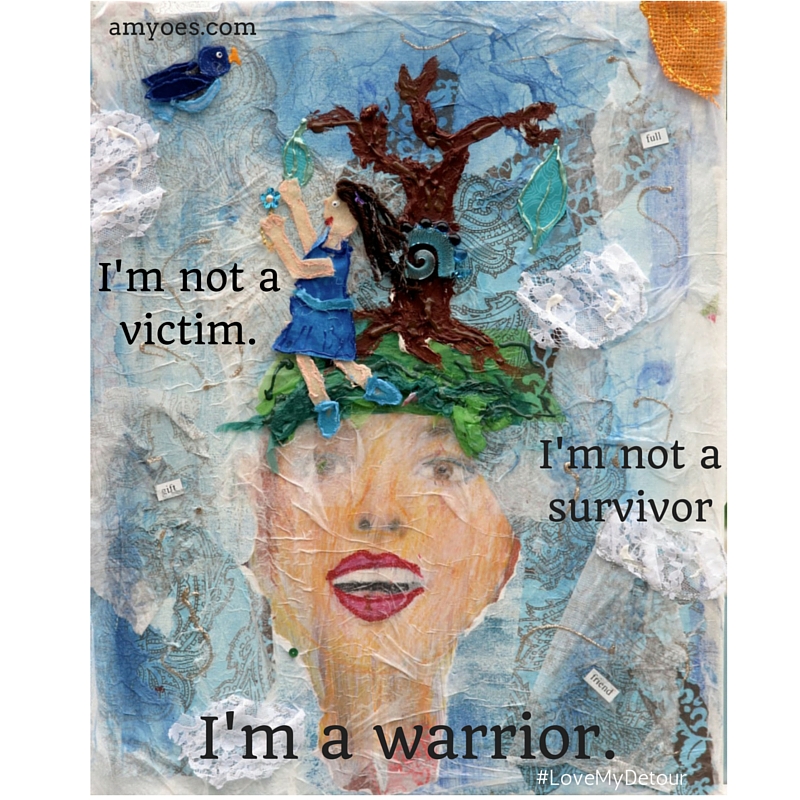 Not Waiting for Life: Embracing your detour

If anyone can be considered an ‘expert’ at making lemonade, it’s Mind Key’s extraordinary affiliate, Amy Oestreicher. She took the incredibly sour lemons life gave her at the age of 18, and turned them into a sweet adventure that has not only allowed her to achieve her dreams, but to become a stronger woman than she ever imagined.  As someone who hated the idea of waiting, she learned that embracing each moment meant never having to wait again.

Today, Amy teaches others to embrace “detourism” as a PTSD peer-to-peer specialist, artist, author, writer, speaker, award-winning actress and playwright. Here, she shares the tale of her personal detour, and how it changed her life.

I’m the youngest kid in my family, and with two doting parents and three big brothers to overprotect me, I guess I was used to getting what I wanted.  When I didn’t, I was used to whining about it, while my oldest brother belted out “You can’t always get what you want,” as he sang along to his Rolling Stones Album.  That made me cry harder–I hated waiting.  I still do.

I’ve spent a lot of time “waiting” in my life. As a kid I grew antsy with impatience, waiting until I was “older” to start dating, to go to the mall unsupervised, to learn how to drive. I was counting the days until I turned 18, giddy at the idea of college and independence at last. Two weeks after I turned 18, I was pulled into another realm where “waiting” took on an entirely new meaning.

When an unforeseen blood clot caused my body to go into septic shock, my life changed forever. Now, it was my devoted family who waited patiently and lovingly while I recovered from a three- 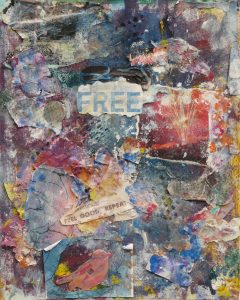 Sometimes our biggest pauses in life can lead to our greatest opportunities.        Art by Amy Oestreicher

month-long coma. When I awoke, I waited many more months before I could take a breath of outside air once again. I became extremely well-versed in patience–little did I know that I’d have to wait eight more months before I was discharged from the ICU, six years before I could drink a sip of water or eat a morsel of food again, and 27 surgeries before doctors could create a makeshift digestive system for me.

As a born go-getter, I’ve never been great with patience. So I became extremely frustrated as doctors explained to me how “it would be a long road to recovery, but I’ll get there.” But healing physically and recovering my self emotionally… feeling my aliveness as well as being alive… I learned that this is a daily process, a lifelong one. Life will not always be perfect, and there’s no reason to wait until things are.

I had this fantasy that the day I was finally discharged from the hospital, everything would be “back to normal.” I’d have my old body back–devoid of any medical scars, tubes, bags or IVs. I’d be eating and drinking again. I’d be able to run, jump and leap like I had in dance class just the week before my coma. These surgeries would just be a “blip” in my life, and now it could proceed as it was meant to.

But I learned something far better. I learned my life as I knew it had shattered, but I could reassemble the pieces differently, but still beautifully, like a mosaic. These “imperfect” shards of a life I longed to reclaim could create a work of art even greater, using the grout of experience and newfound wisdom.

Over a decade has passed since my life took this messy detour that put most of my anticipated plans on hold, if not changing them completely. But this detour became he richest time in my life. To this day, I am still healing physically and emotionally. Every morning I make a new attempt to find who I am and to discover who I am becoming. If I had waited for life to be “perfect,” or at least for life to go back to “how it was,” I would have missed out on so many things. 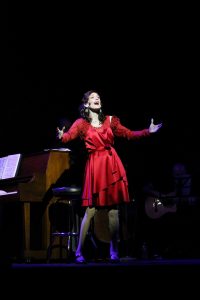 I would have never mounted my first solo art show after learning to paint in the hospital. I would have never written a one-woman musical about my life that I’ve performed for five years or given a TEDx Talk… If I hadn’t had the audacity to set up an online dating profile for myself while still in my hospital gown, on IVs and recovering from a disastrous surgery, I would never have married the first love of my life.  And when I was suddenly hit with a divorce less than a year later, I learned that there is never a reason to wait to fully love yourself.

Not “waiting” for life to happen can mean simply showing up and staying open to where the path may lead.  Even with wounds that still haven’t healed – and that’s not a metaphor – I’m on the road.  If I’m willing to feel, I’ll always have my heart to guide me. Apparently you don’t need a stomach to survive, but, a heart is indispensable!

They say that all good things come to those who wait. But what for? Every day is an opportunity to learn, to grow and better myself. I love the imperfect twists and turns my life has taken, simply because they have made me who I am. It has been a mess, having life as I knew it shattered to pieces. But bit by bit it’s reassembling — different, imperfect, but beautiful all the same.

As the creator of the Gutless & Grateful, her one-woman autobiographical musical, Amy Oestreicher has toured theatres nationwide, along with a program combining mental health advocacy, sexual assault awareness and Broadway Theatre for college campuses. See Gutless & Grateful at one of these great New York City venues:

Registration is free and is open to the public. 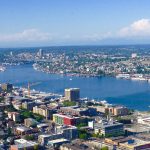 The best time of year to travel – look to the weather 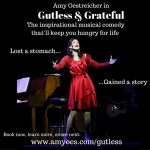 Time is running out to see a great show!